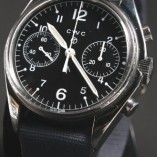 Cabot Watch Company was Supplied throughout the 1970s to the British government which was one of the main suppliers of this style of chronograph. Being such sought after today, Cabot Watch Company has made a limited run of thisCWC 1970s Mechanical Chronograph remake military watch, which is made as close to the spec of the original – all Swiss parts, made and assembled in Switzerland. Supplied with a certificate of Swiss horological authenticity and quality.

There are no reviews yet.